KALO (Taro): The life of Kanaka Maoli, the indigenous Hawaiian people, is linked closely with kalo, also known as the taro plant. Kalo is believed to have the greatest life force of all foods. According to the Kumulipo, the creation chant, kalo grew from the first-born son of Wakea (sky father) and Papa (earth mother), through Wakea’s relationship with his and Papa’s daughter, Ho`ohokulani. Haloa-naka, as the son was named, was stillborn and buried. Out of his body grew the kalo plant, also called Haloa, which means everlasting breath. Kalo and poi (pounded kalo) are a means of survival for the Hawaii people. By eating kalo as poi, one at a time as a ritual around the poi bowl (`umeke) at the center of the diners, the protocol of Hawaii is maintained. This is a ceremony of life that brings people together and supports a relationship of `ohana (family) and of appreciation with the `aumakua (ancestors).

Taro came to Hawaii Nei with the earliest Polynesian settlers in their canoes and has been cultivated as a staple and staff of life from ancient times in the tropical and subtropical latitudinal band around the earth. Taro grows in tropical Africa, the West Indies, the Pacific nations and in countries bordering the Indian Ocean in South Asia. In Hawaii, where cultivation has been the most intense, in the early days there were more than 300 varieties of taro. Approximately 87 of these varieties are still recognized today, with slight differences in height, stalk color, leaf or flower color, size, and root type. Some of the local varieties are Mo`i, Lehua, Ha`akea and Chinese.

Taro, whose scientific name is Colocasia esculenta (or antiquorum) is cultivated both in the uplands as high as 4,000 feet, and in marshy land irrigated by streams. The plant is a hearty succulent perennial herb, with clusters of long heart or arrowhead-shaped leaves that point earthward. Taro grows on erect stems that may be green, red (lehua), black or variegated. The new leaf and stem push out of the innermost stalk, unrolling as they emerge. The stems are usually several feet high. Tiny new plants appear around the base of the root corm. The pua, inflorescence, is an open yellow-white tube, enclosing a spike covered with flowers. 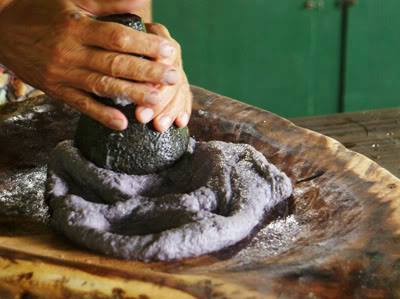 The whole plant:  the kalo (corm) and luau (leaves) are eaten, and the huli are replanted. Depending on the variety, all parts of this sturdy and vital plant are eaten. The leaves are cooked as greens, similar to spinach. The tubers are eaten baked, boiled or steamed, or cooked and mashed with water to make poi. The fibrous flesh of the tubers is tough and spongy, ranging in color from white, yellow, lilac-purple and pink to reddish. Most important is the starchy root with enough glutinosity to make quality poi. The stiffest poi is called locally “one finger” and the most liquid “three finger”. “Two finger” poi is considered the best by some. The planters know which kind of taro makes the best poi, which variety has the most tender leaves and which has the necessary medicinal properties.

Taro is often fed to babies as their first whole and natural healthy food, as well as to the elderly, for its ease of digestion and high vitamin content. Some people call poi the “soul food” of Hawaii. Poi is eaten fresh or allowed to ferment for a few days, often for longer, creating a sour taste considered pleasant, acid, but not alcoholic. In the old days, a person might consume up to five pounds of poi per day. Several kinds of kalo had such special flavor and color that they were reserved only for the chiefs. It is said that Soviet astronauts ate dehydrated taro in space, adding water to the packets … instant poi!

In the kalo and poi-based agricultural society, the people of ancient Hawaii were dependent on wetland taro. Great skills were needed to terrace, cultivate and irrigate the land along streams, as well as the social and political skills to maintain it. The planters of wetland taro were practicing engineers, building walls of earth reinforced with stone to enclose the lo`i (pond field). Along the banks of the lo`i were planted mai`a (banana), ko (sugarcane), ki (ti), and wauke (paper mulberry) for kapa cloth, also known as tapa. In the pond field, several varieties of fish were grown, such as `awa, `ama`ama, o`opu and aholehole. An acre of wet lo`i could produce 3 to 5 tons of food per year. Dryland taro was grown in the lower forests where the soil was rich and the rainfall sufficient. Stone borders surrounded these gardens and can still be found on a forest hike.

Today there are still functional lo`i along the Keanae, Wailua and Hana coastlines of Maui, as well as other locations throughout these Hawaiian Islands.

In planting both wetland and dryland taro, the huli, the planting material, consists of a 1/2 inch thick slice of the top of the kalo (corm, from which derives the plant’s name) attached to 6 to 10 inches of the leaf-stem. These protrude above the water or dryland where planted.

The bottom of the corm/root is saved for cooking and eating, making taro a recyclable plant. In 6 to 12 months, depending upon plant variety along with soil and water conditions, the taro should be ready to harvest. Each parent tuber produces from two to l5 `oha, side tubers of corms, up to 6 inches in diameter. `Oha means specifically the suckers or shoots concentrically growing from the corm of the kalo/taro plant. Knowing this, it is easy to understand why the Hawaii family as a group is termed `ohana, which literally means “all from the shoots”.

Before kalo can be eaten, all parts of the plant must be cooked, in order to break down the needle-like calcium oxalate crystals present in the leaves, stem and corm. These could be extremely irritating to the throat and mouth lining, causing an acrid burning and stinging sensation.

Lu`au – Taro Leaf Lu`au is the name of the edible taro leaf, from the word lau, leaf. The lu`au leaf is another kinolau of Lono. Lu`au supplies high amounts of vitamins A, B and C, as well as calcium, iron, phosphorus, thiamine and riboflavin. The cooked corm and poi have fewer vitamins, but are an excellent carbohydrate source and have the ability to balance the pH factor in the body, as they are an alkali producing food.

The following are a few of the medicinal uses of poi and the kalo plant.  Poi is used to settle the stomach. Mixed with ripe noni fruit, it can be applied topically for boils. Poi can be mixed with pia (arrowroot starch) and taken for diarrhea. Undiluted poi is sometimes used as a poultice on infected sores. A piece of taro stem, haha, can be touched to the skin to stop surface bleeding. Some infections respond to the use of taro leaves mashed with Hawaii salt. This poultice can be applied to an injury, covered and wrapped with a large taro leaf. For a sting from an insect, the stem can be cut and rubbed on the afflicted area.

Mud from the taro patch was used as a black dye for lauhala and kapa cloth, while some leaf-stem juice yielded red dye. Also, diluted poi was used as a paste to glue together pieces of kapa cloth.

The kalo plant is said to be the hiapo, the number one sibling. It is also said to be the kinolau, the body form, of Kane, the procreator. The small round depression where the taro stalk meets the leaf surface is called the piko, from whence comes the name for the human belly button.