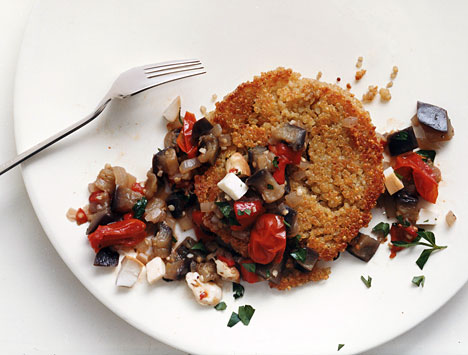 Make quinoa cakes:
Bring water and 1/2 teaspoon salt to a boil in a heavy medium saucepan.

Meanwhile, wash quinoa in 3 changes of water in a bowl, then drain well in a fine-mesh sieve.

Stir quinoa into boiling water and return to a boil, then simmer, covered, until quinoa is dry and water is absorbed, 20 to 30 minutes. Remove from heat and let stand, covered, 5 minutes. Transfer to a large bowl and cool, stirring occasionally, 10 minutes, then stir in egg.

Make topping while quinoa cooks and chills:
Toss eggplant with 1 teaspoon salt in a colander and drain 30 minutes. Squeeze handfuls of eggplant to extract liquid, then pat dry.

Cook eggplant, onion, garlic, oregano, and 1/4 teaspoon each of salt and pepper in oil in a 12-inch heavy skillet over medium heat, covered, stirring occasionally, until softened, about 5 minutes. Stir in tomatoes, roasted peppers, and water and simmer, covered, stirring occasionally, until eggplant is very tender and mixture is thick (if dry, thin with a little water), about 10 minutes.

Cook quinoa cakes:
Heat 2 tablespoons oil in a 12-inch nonstick skillet over medium heat until it shimmers. Carefully add quinoa cakes and cook, turning once carefully and adding remaining 2 to 3 tablespoons oil, until crisp and golden, 8 to 10 minutes total (pat cakes to reshape with cleaned rubber spatula while cooking if necessary). Transfer to plates.

To serve:
Return eggplant ragù to a simmer and stir in parsley and half of mozzarella, then simmer, stirring, until cheese just begins to soften, about 30 seconds. Spoon over quinoa cakes, then sprinkle with remaining mozzarella.

Chef Miyoko Shinner gives us a first hand approach on making an incredible vegan mozzarella that is tasty and very versatile. This recipe is from her cookbook Artisan Vegan Cheese and can be downloaded at http://www.artisanveganlife.com/ .

Caprese Pasta Skillet mixes fresh basil, cherry tomatoes, pasta and mozzarella to make a quick 30 minute meal that the whole family will love. Perfect dish to use up your summer garden tomatoes and basil!

Cook pasta according to box, drain water reserving ½ cup of the pasta water when done and set aside.

In a large skillet heat the 6 Tablespoons olive oil and saute the tomatoes for two minutes. Add the garlic and oregano. Continue sauteing until the tomatoes are soft.

Add in the reserved pasta water and simmer for an additional 1 minute stirring to combine.

Add the pasta, basil and mozzarella and heat on low stirring until the cheese is melted, about 2-3 minutes. Add salt and pepper to taste and crushed red pepper flakes (optional).

Notes:   Add grilled chicken to add protein to this dish.